This section contains the basic postulations on various dimensions of Reality. Postulations are statements about Truth. These are in the form of aphorisms (सूत्रात्मक)- such that maximum knowledge is encapsulated in minimal words.

Knowledge is the anchor for the human being, his innate, inalienable need. This knowledge is: 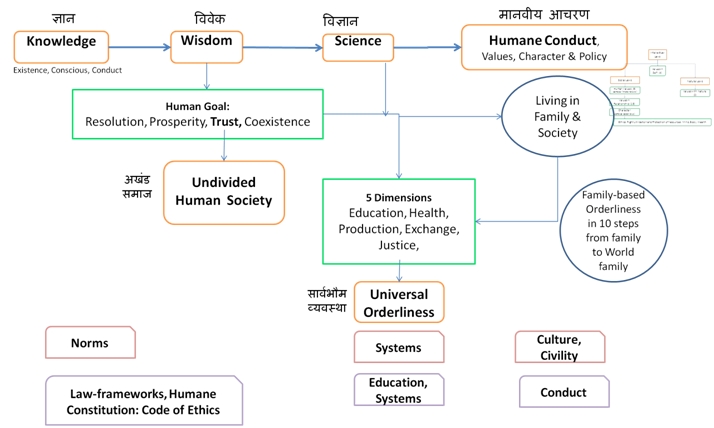 Wisdom based on this knowledge: (vivek)

Science based on this wisdom: (vigyaan)

Existence is in the form of co-existence, as “nature saturated in all-pervasive-entity or space”.

There are only two kinds of realities in Existence:

Units or matter are

To be “saturated” means to be: (संपृक्त)

What we call as ‘empty space’ is not ‘empty’; it is equilibrium energy itself and the fundamental source for all activity (at the atomic level) in the entire universe, in existence.

Space manifests as ‘energy’ in physiochemical matter (jad) and as ‘knowledge (gyaan) or consciousness (chetana) in the conscious unit (chaitanya) (Self or Jeevan).

These units, or ‘Nature’ is manifested as the 4 “natural-orders”:

Each unit in Existence, i.e. each of the four ‘natural-orders’ has the following dimensions:

Every ‘unit’ (from an atom to the larger formations of matter) in existence has these four dimensions. Of these four dimensions, ‘form/appearance’ and ‘properties’ are ‘form-full’ in that they have length, breadth & height while innate-nature & religion are form-less (no length, breadth, height). Understanding both the form-full and form-less dimensions is needed to understand these 4 ‘natural-orders’ completely, to understand reality.

This enables us to understand their ‘innate-nature’ as their ‘purpose’ in existence, their participation or their value; and their religion, as their very ‘being-ness’ or ‘intrinsic-ness’, or their ‘orderliness within’.

To date, humankind has largely concerned itself with the study of only the ‘form-full dimensions’ of reality (form/appearance and properties) ignoring the following dimensions of reality, which still remain to be understood:

1) All-pervasive-entity (omnipresence) or space, and its attributes of

4) Relationship between the above:

The problems we have today are a result of not having the above knowledge. The reason we do not have this knowledge is because we have not yet ‘used’ certain faculties of knowing present in ourselves (Self or jeevan).

Madhyasth Darshan – Coexistentialism (Jeevan Vidya) has proposals for the above, in the form of words that point to these realities. On Studying these realities with the aid of words, and using the ‘faculty’ of imagination present in us under the guidance of someone who has this knowledge, we are able to have ‘understanding’ of these realities in our own right.

(* Existence = all that exists).  The smallest unit to count as ‘1’ is the atom – this is the ‘stable point’ for counting, below which we do not find any definiteness. The natural state of being of ‘matter’ is in the form of an atom. This atom is natural to existence. The human being does not ‘organize’ the atom, or ‘regulate’ them; nor are we ‘supplying’ energy to atoms for them to be continuously active; and neither have we created the various types of atoms.

We can only study and comprehend stable states – and our study has to include the ‘whole’ [units and space] and ‘the observer’ [the conscious entity that is understanding].

The atom is thus the fundamental basis for orderliness in existence, and its continuity. This ‘orderliness’ is seen across all 4 ‘natural-orders’, and except in the human, on this planet.

Units in Existence are self-organized, or in ‘orderliness within’ and participate in the larger orderliness. No one is ‘organizing’ this from the outside. This is their natural state of being.

#origin of the word ‘religion’: based on Latin religare ‘to bind’

Man living in animal-consciousness uses only partial activities in the Self or conscious unit (jeevan), and as a result lives with animal-like attributes. He lives only with Assuming (& expectation of Knowing) & ‘innate-nature’ as wretchedness, cunningness, cruelty: which is unnatural to him, and is not acceptable to him, or to others (when expressed). He has an expectation for resolution & happiness (his religion) but is unable to have/ensure continuity of the same.

Man living in this state, makes some assumptions regarding his ‘innate-nature’ & religion that do not have universality and thus cause differences in human-society. This is why this plane of living is called ‘animal-consciousness’ since even though man has progressed from where animals are, he has still not known his innate-nature & religion, still not accessed the will to ‘know’ and hence, assumes struggle for survival as the goal (akin to animals) and an innate-nature that is akin to animals.

The proof of this is the definition of the Human as a ‘social-animal’.

Man living in human-consciousness lives with all 10 activities in the Self or conscious unit (jeevan), and as a result lives with the humane-attributes. He lives with Knowledge (& Assuming, Recognition and Fulfillment on this basis) & his ‘innate-nature’ is steadfastness, courage & generosity: which is natural to him, and acceptable to him, and to others (when expressed).

I.e. the rest of the 3 ‘natural-orders’ are living according to their innate-nature & religion. Only man needs to do so. He is able to do so by having ‘knowledge’. Man has thus been recognized as belonging to the ‘knowledge-order’. Knowledge is his fundamental need. Thus, on the basis of living with human-consciousness, it becomes clear that:

[innate-nature = purpose, value]  [religion =  inseparability: that which cannot be separated from a unit is its religion, same as dharma

Thus, the fundamental need for the human is to SHIFT from living in animal-consciousness to living in human-consicousness, which is only possible via Knowledge via the method of consciousness-development.

Click here to read important words and definitions used in this Section:

Important Definitions of words used in Knowledge of darshan of Existence.