‘Jeevan’ is the name given to the conscious aspect of a human being (what we commonly call as ‘I’or ‘self’ is actually referring to this conscious unit or jeevan without actually knowing it).

This ‘jeevan’ or ‘conscious’ or ‘self’ has been known to be a ‘constitutionally complete atom’. (gathan-poorn parmaanu)

I.e. it is an atom in which there cannot be any further structural change (change of form, or constitution). As a result, it becomes ‘conscious’ (chaitanya) and co-exists with the body. This ‘conscious unit’ cannot be seen with the naked eye or via any instrument, since it is subtler than both of these. Only ‘jeevan’ can know ‘itself’; or, only ‘I’ can know ‘myself’.

A human being is a combination of the conscious unit ‘jeevan’ (Self) and the physio-chemical body (jad). The activities and ‘nature’ of ‘jeevan’ can be understood.

The conscious unit is an activity; it is a “constitutionally-complete atom”. It is’ material’ in the sense it is made up of matter’ and hence a ‘substance’. It has dimensions and occupies space (has volume) but its weight cannot be ‘measured’ (weightless), whereas physiochemical atoms have weight. The conscious unit’s (chaitanya ikai) span of function is more than its length, width, and height and it has an active thinking-aspect.  The physiochemical unit’s (jad ikai) span of function is limited to its length, width, and height and does not have any thinking-aspect.

The constitutionally complete atom, or the Conscious Self, (Jeevan) is:

Each one of us can verify this:

The ‘construction’ of the conscious-unit (jeevan, chaitanya), its activities, capabilities, and need are the same in all Humans. Jeevan is the one that experiences pleasure-pain, happiness-unhappiness, feelings & emotions, reasons & analyzes, wants knowledge, and wants continuous happiness. Continuous Happiness = harmony in all the activities in Jeevan (conscious unit, or Self).

In the state of delusion (lack of knowledge) ‘jeevan’ assumes itself to be the body – Only partial faculties in ‘jeevan’ are active in this state (4.5 out of a total 10).

10 Inseparable activities of the Conscious Unit (Self), or ‘Jeevan’ with the 5 ‘Powers’ and 5 ‘Forces’: 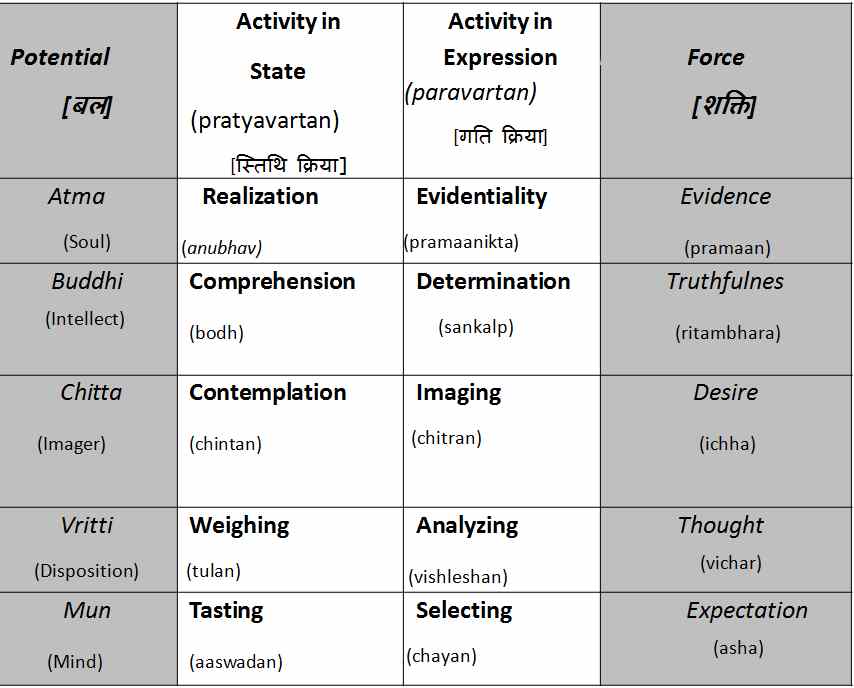 * English-equivalent words in the table above are indicative only & to assist getting a sense of the activity. They are under revision. See Definitions for clarification on these activities. These activities will have to be understood retaining their original hindi nomenclature to ensure the meanings are not ‘mixed up’

Atma (Soul*): Is the name for the centre-particle of the conscious atom (‘jeevan’, Self). Its activity is Realization (Experience) of Coexistence and its Evidencing/Display. Evidencing is in the form of the force of ‘Evidence’ in expression, or the name of the activity of Evidencing is ’Evidence’

Chitta (Imager): Is the name of the second orbit of the conscious atom (‘jeevan’, Self). Its activity is Contemplation and Imaging. Imaging is in the form of the force of ‘Desiring’ in expression, or the name of the activity of Imaging is ’Desiring’

Vritti: (Disposition) (Vritti literally means whirl, from ‘pravritti’) Is the name of the third orbit of the conscious atom (‘jeevan’, Self). Its activity is Weighing and Analyzing. Weighing takes place on the basis of one of 2 sets of perspectives: “likes, health, profit” OR “justice, religion, truth”. [religion: inseparability]. For the human living in animal-consciousness, only the perspectives of “likes, health, profit” are active. Analyzing is in the form of the force of ‘Thought’ in expression, or the name of the activity of Analysis is ’Thought’

The principle activities of a human being can thus be understood by the activities in jeevan. The rest is merely the physio-chemical activities of the body. Activities in ‘jeevan’ include all familiar activities like tasting, selection, evaluation, thinking, memory, desiring, feeling, imagining, dreaming, curiosity, using logic, reason, intuition and yet-unidentified activities which are detailed out in Madhyasth Darshan.

All these activities can be studied and known. I.e. it is possible to know ones ‘conscious self’ fully.

As of today, we ‘use’ or are ‘aware of’ or, are ‘awakened’ in only 4.5 of the above 10 activities . The remaining 5.5 activities still remain to be ‘known’ – or awakened. This is the basic cause for our unresolved condition, unanswered questions, our problems.

The human living with only 4.5 of 10 activities awakened in ‘jeevan’ is living in the purview of ‘animal-consciousness’. This is ‘delusion’ and the cause for illusion of ‘reality’ (Incomplete/ wrong estimation of reality). The ‘view of reality’ while operating at this level of cognition is restricted to the dimensions of ‘form & properties’ and hence only ‘Assuming’.

The faculty of Knowing remains to be fulfilled. The only perspectives (drishti, or vision) active in ‘weighing’ are those of “likes, health & profit”. Our thinking, desiring, and goal of living remains confined to these aspects.

The dimensions of innate-nature, Religion & Truth is unknown; we only have the language & assumptions for these realities. Living at this level, there is no sound basis for the activity of Imaging (Desiring) , and therefore, our Desires, Thoughts and Expectations keep changing, and ‘we really don’t know anything in our own right’. We are unable to be ‘stable’, we have contradictions within, and this itself is unhappiness.

We make wrong assumptions about human-human relationship and human-nature relationship and these manifest as the multitude of problems we have. It is not possible to understand Existence, Reality or any ‘grand-unifying-theory’ when operating from this level.

This means understanding and living with ‘Law, Restraint & Balance’ [niyam, niyantran, santulan] with the rest of the three ‘natural-orders’ and with Justice, Religion & Truth [nyaya, dharm, satya] with the Human Order.

This is only possible when we have knowledge of all four dimensions of reality: form, properties, innate-nature & religion of all the four ‘natural-orders’ for which ‘consciousness-development’ is needed.

Thus, one lives with knowledge of Actuality, Reality & the Truth and is ‘resolved’ and hence in harmony, is happy. Our imagination, which earlier had no basis of its own and was driven by assumptions, now functions according to the knowledge gained in the Orange shaded region, which itself is surety about the truth, confidence, happiness.

122 conducts in the awakened Self or Jeevan

The conscious unit (Self, or Jeevan, commonly referred to as ‘I’) has been found to be a “constitutionally-complete atom”: There are 61 particles in the conscious-atom (jeevan). Each of these particles has state (stithi) and motion (gati). There is a conduct (behavior) for every state and every motion.

Each of these activities has been identified, named and defined in Madhyasth Darshan.

Thus, the understanding of the conscious-unit (jeevan)*, becomes the basis for:

Today, (while living in animal consciousness) we only have the words and imaginations of the above conducts, activities and systems, do not have the meaning, the understanding, and hence do not live according to the above. With only 4.5 activities awakened, we have deformed versions of the conducts (behavior, realities) and systems given above.

122 activities in the awakened Self or Jeevan

* Each of the conducts above is defined and explained in the book: ‘human consciousness-oriented psychology’ (manav sanchetana-vaadee manovigyaan).